I am cooler!  And I’ll tell you why in just a sec (and it’s not just because of how cute I was as a baby – look at that face!).  First, I have to say Happy Father’s day to all the dads, moms who play dad, men who stand in the gap, and to the men who chose to be dads when they didn’t have to be!!  Your role is more important than ever…..and I’m lucky to have had the best and know some of the best!  I am also lucky to have some pretty great faux dads that have taken me in as their own (especially the latest guy – my mom’s fiance, who has done nothing short of making sure my mom and me and my sisters are taken care of!! Love you, Joel!)

I’ve never been able to sit still and find a way to write all the encompasses my dad.  Or, I should say that I’ve never felt like I could do it justice.  He really deserves a book.  I’m not just saying that as a proud daughter, who thinks her dad was the greatest.  I mean, he really deserves a book.  He is the survivor of a terrible incident (as in survivor out of 9 people that these monsters killed – while being handcuffed to a dead guy and stuffed in the trunk of a car – where he was trapped fro 6 hours in June, in Arkansas…..sooooo yeah, that’s a story worth telling).  A book is on my bucket list to complete, but for now, I blame life in general and a ridiculous amount of fear for not having done it yet.

Although the above tid bit is enough to put him leaps and bounds ahead on the list of great guys, that’s not why makes me cooler than you on Father’s Day.  I could argue that these throw back pics included should definitely put me at the top of cool, but that’s not it either.

You see, what makes me just a TINY bit cooler than you today (unless you’re my friend Aaron, I’m not as cool as him) is that I get this day as a reminder that I was chosen.  I’m gonna take it up a notch and even say that I was hand picked.  My dad came along after I was already born.  I was part of the package of loving my mom and I was VERY young when he showed up.  Thankfully, too young to know that the “real” one had basically abandoned his opportunity to raise this legend!  And thankfully, too young to have that pre-established hesitation for someone coming into the picture (even though the above shows me less than happy, in general. haha).

I’m more than proof that DNA isn’t the sole factor of making a child.  My dad chose me.  I think that’s what has always made me a little cool 🙂  He didn’t have to be my dad, but he made the conscious decision to.  And he did so, fiercely.  There was never a difference.  Not one time.  If anything, he was harder on me.  I am more like him than I would’ve ever thought possible – and I’m ok with that 🙂  (even the stubborn).  He and my pop were two of the most important men in my life and I will never be the same without them – but I’m proud to be who I am because of their influence! 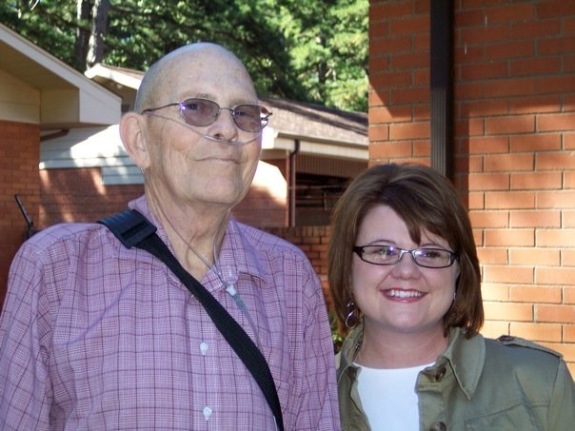 Some guys don’t get to choose.  Some are told they are going to be a dad and enter into the role out of obligation.  Some know they want to be a dad and follow the process of “first comes love, then comes marriage……”.  Any way that you become a dad and step up to the role is great.  I in no way want to disregard that. I just simply want to recognize that  (and am a little partial to this method) my dad chose me.  To make a deliberate choice to fill a role, an often thankless role and to fill the role with your whole heart – THAT makes you one heck of a guy! 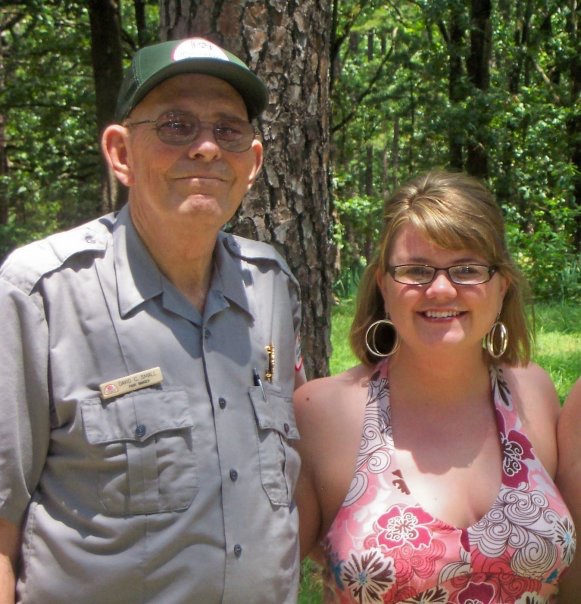 One of my favorite stories is told by my aunt, after my dad passed.  She tells about the first day my dad had duty alone with me.  She says that he came to my grandma’s with me in tow, in matching denim overalls.  She goes on to always make sure I know that on that day, she had never seen my dad look more proud.  She talks about how he entered the house, carrying me, and was beaming.  My dad had been through a lot by then.  He had a lot of reasons to not be a happy person.  And, if you knew him, you knew that he definitely had his grumpy and closed off side.  A side I fought him on through much of my teenage years (because of course I was dramatic and wanted to always talk about my feelings lol – oh his eye rolls will forever be stuck in my head).  But to hear her tell about how on that day, he had a glow………GOODNESS it makes my heart tingle EVERY TIME I recount it! 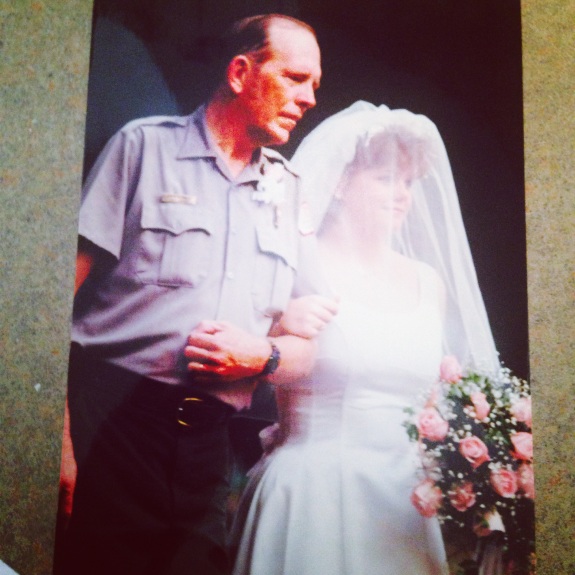 My dad expected a lot from me.  My dad was strict.  My dad was one of the best math teachers to ever live. MY DAD WAS A FIGHTER (polio, shot and left for dead, heart attack on the day of my grandpa’s funeral, and a cancer journey).  You will be hard pressed to find someone that was as tough as him.  And he NEVER complained.  He might have gotten grumpier at times, but he just never complained.  He wouldn’t ever let me cry for very long without expecting me to pick myself up and keep moving.  He wasn’t a “hugger” or emotionally available guy. I can still remember the first time he truly said “I love you”.  It was a big deal.  He HATED that I was a procrastinator.  We spent most of my teen years fighting.  He didn’t “save” me from a lot of mistakes, because he knew that I was the type that just had to learn on my own – but also believed in me enough to know I was smart enough to eventually figure it out (even if I took longer than he cared for, to do so).  I’m sure we could all say we gave our parents a run for their money.  BUT HE CHOSE TO STAY.  He chose me.  And I know that he was proud.  He told me so, before he died, in a very emotional voicemail, that I would sell my soul to the devil to still have. 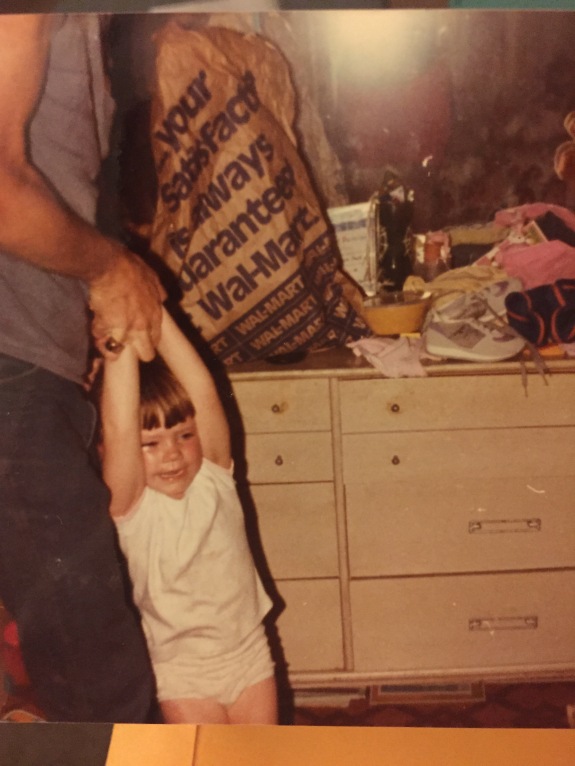 I can’t stop smiling and I have erased how many extra times I have typed it already.  HE CHOSE ME.  And I didn’t appreciate it enough, of course, until it was too late, and he was gone forever.  But, like I typed above, he always knew I would “get it” eventually.  So, I’m sure he is wondering around in heaven, not a bit surprised that I took way too long to “get it” about him.

I could sit on the front porch all day, with a glass of cold sweet tea and tell story, after story about him.  His story gives me breath and life….and it’s REALLY COOL that when I seem to be missing him the most, the big guy sends someone my way to listen to me ramble about what an incredible story (or 3) my dad had.  He is one of three major examples that contribute to me being set apart (I don’t say that to brag – because if anything, I’m a little ashamed that I haven’t made the most of what is so clear about those examples).

I don’t know why it took me until the eve of this Father’s Day to realize the whole chosen thing.  I wish it would’ve “clicked” while he was still alive, so that I could write him a cheesy card that he would just roll his eyes at and throw away (he was a man of few words – I was a child of too many words lol).  Maybe he would’ve kept it – he did keep this amazing wood burning art I did for him :P.  He wouldn’t have sat and let me brag too much about him though, he wasn’t that kind of guy. 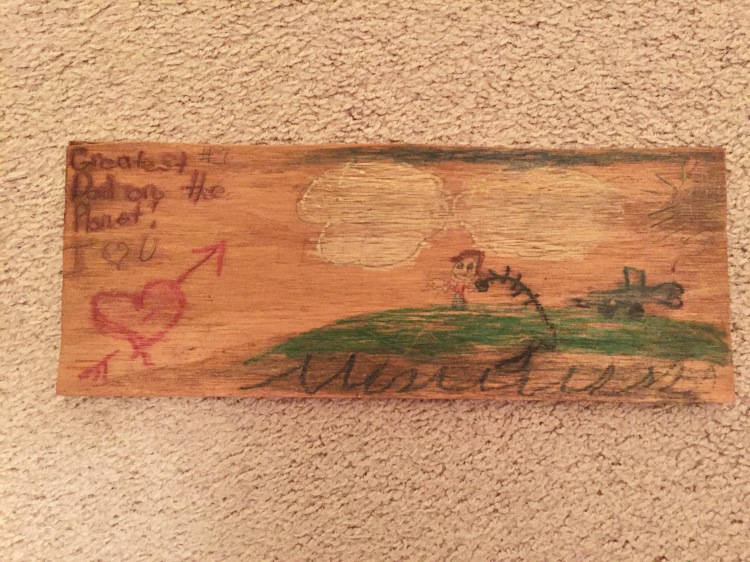 I’m pretty lucky that I was chosen.  I’m pretty proud at how many people also saw how awesome he was, and I will never tire of hearing people talk about him (they still do, to this day – which is testament enough to his impact).  It’s pretty hard to justify letting anyone tear you down or make you believe in yourself less, when you had someone choose to fill one of the biggest roles in your life.  I had someone pick me!  And I will do my best to remember that before I cry to a friend (like I may/may not have done last week) when some stupid guy doesn’t pick me.

Thanks for letting me type out loud and process what is normally a rough reminder day.  If you read all the words, thanks for letting me proudly share about my awesome dad.  If your dad is still here, hug him or call him, but do not let him go unappreciated on this day.  Dad’s are such important people!