I tell a male friend today, that I need new wipers. I also jokingly mention that these types of moments are the ONLY times lately that I don’t like being single. (As a side note the other times on the list are when my back itches or when I have already taken my bra off and need something from the store.) 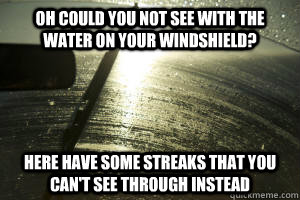 Said friend makes fun of me and says “wow as strong, independent and feisty as you are, I would think wipers couldn’t defeat you”  Well….when you put it that way…..

I buy wipers, $54 wipers (not sure when I even bought wipers last, but that would’ve bought a great pair of shoes!!). I refuse assistance in installing them. Because, have you met me? I’m tough. And resourceful. And S T U B B O R N. Soooo the quickest way to get me to do something is to tell me that I can’t.

I kill it on installing them myself. Psh, that wasn’t hard at all…..or so I thought
Since I’m in such a car care mood, I go to the fancy new automated car wash (and believe me, it is FANCY). I am making a lot of trips to Little Rock with this brain tumor fight and want to be sure my car is going to take care of me.

Turns out, the only thing I killed in wiper installation, was the wipers themselves. Didn’t lock them apparently. They flew off in the car wash. 🤦🏼‍♀️

Back to the store I go. I buy new wipers….another $54……..because I know if I wait til tomorrow, Mother Nature will send a monsoon my way (because her and I are not the best of friends). I did not, however, go back to the same parts store. I went to the one down the road. I’m way too proud to admit defeat. They don’t have my size in stock (sounds like m trips toVictoria’s Secret). I end up back where I started. Where the sweet guy who originally helped me simply says “I knew a girl like you once. She sure was a firecracker. But she sure took the long way around more often than she should have”

I happily let the gentleman install the new wipers for me.

Moral of the story: Don’t be stubborn and always trying to prove a point. Sometimes there isn’t even a point to prove. All that would’ve come out of me actually doing the wipers correctly, would’ve been a post on Facebook. I think any of my Facebook friends will tell you that’s the last thing anyone needs…another random post from Alicia.
Ask for help. Don’t always feed your weaknesses. There are people to fill in the gaps. Be resourceful enough to use them, so you have more time to be good at what you’re good at.

Tell your friends to suck it, if you need to. And take your extra $50 and treat yourself 😝

P.S. I now also know that wipers are much cheaper at Walmart 🙄